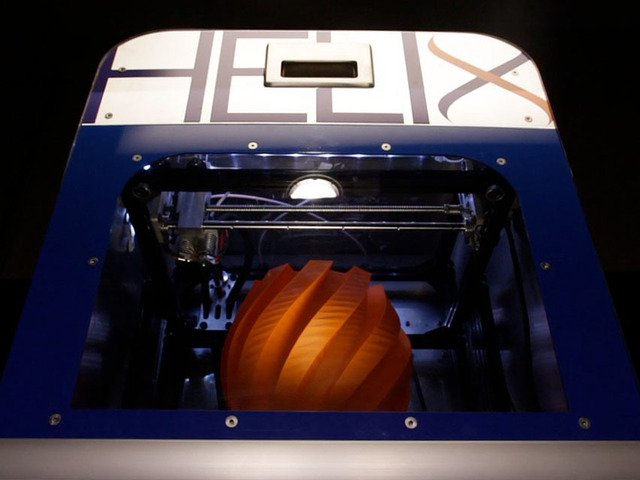 Kickstarter has been a great place to support affordable 3D printers, but most of those projects are intended for hobbyists and consumers. The professional 3D printer market is still largely made up of the big players like Stratasys and MakerBot, but one company has taken to Kickstarter to fund what they feel can beat those guys at their own game.

Say hello to the Helix – a professional grade 3D printer from Acuity Design equipped with a dual-extruder and a large enough build volume to make your prototyping dreams a reality. The Helix is comparable to the MakerBot Replicator 2X, but it has a bigger build volume and supports more types of filament. In fact, this is where the Helix likes to brag as it supports not only standard 1.75mm diameter ABS, PLA and PVA filaments, but also non-traditional filaments like Nylon, PETT and HIPS.

What may be perhaps the best thing about this 3D printer, however, is that the team behind the Helix built their own dual-extruder to address what they felt was the biggest issue facing 3D printers today – slipping and stripping filament. The team is so confident in their extruder that they’re offering it by itself for $400 for you to use in your own 3D printer.

As the Helix is a professional grade 3D printer, it’s not cheap. The team is, however, looking for 10 people to test pre-production units and these will cost $4,850 each. After that, the price goes up to $5,250 for what they call the Early Bird Special. When it launches next year, the Helix will retail at a MSRP of $6,850.

Acuity Design aims to raise $95,000 over the next month. It has already raised $1,251 within a day, and that number will probably go up as more people find out about it. After all, it’s not often that you see a professional grade 3D printer like this pop up on Kickstarter for such an affordable price.