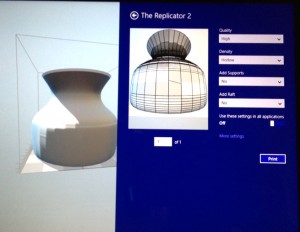 It’s ironic that with the rapid growth of 3D printing and printers that they have not enjoyed true OS support. That is changing fast. Microsoft with it’s release of Windows 8.1 will include a built-in API allowing developers to include 3D printing into their apps.

Applications are likely to include the familiar-looking print dialogs and setting adjustments we have all become accustomed with our inkjet printers.Soon, 3D printing will be as easy as [Ctrl + P] and [Enter]

See the full press release from MakerBot below

June 26, 2013 – MakerBot, the leader in desktop 3D printing, is excited to announce its support for Windows 8.1. At today’s Build conference, Microsoft demonstrated Windows 8.1 with built-in support for 3D printing. MakerBot has developed a 3D printing driver that uses the new 3D print pipeline in Windows 8.1. With Windows 8.1, customers will experience plug-n-play and seamless end-to-end printing from a wide variety of applications directly to the MakerBot.

MakerBot Replicator 2 Desktop 3D Printers are currently available at www.microsoftstore.com and in select Microsoft stores along with live demonstrations of the technology. Recently, visitors to the Microsoft store at Stanford Shopping Center in Palo Alto have been learning about MakerBot and 3D Printing through an experience and demonstration that will be expanded to the Westfield San Francisco Centre Microsoft store as of today.

“Our goal to is to make the experience of 3D printing as easy as creating and printing a document using Microsoft Word,” said Shanen Boettcher, General Manager, Startup Business Group, Microsoft. “We’re thrilled incredible companies like MakerBot are implementing Windows 8.1 support to make 3D printing a reality for the masses, and we look forward to being inspired by what people create when these amazing new software and hardware experiences come together.”

“MakerBot is about creating the MakerBot 3D Ecosystem that makes 3D designing and printing more accessible. We want to empower more people to create and make things, and working with Microsoft helps our mission, “said Bre Pettis, CEO of MakerBot. “Giving people the tools to innovate and invent just by hitting ‘print’ and sending it to your MakerBot Replicator 2 is an exciting part of fueling the Next Industrial Revolution. I am excited about the opportunities this combination will bring to our current and future customers.”

The MakerBot 3D Ecosystem drives the accessibility and rapid adoption of its desktop 3D printers. It includes Thingiverse.com, the largest collection of downloadable digital designs for making physical objects, and which is empowered by a growing community of makers and creators. It also includes MakerWare software, MakerCare service, MakerBot Filament, the MakerBot Retail Store, the MakerBot 3D Photo Booth, and strategic partnerships including Autodesk, Adafruit, Nokia, OUYA, MoMA and Amazon. MakerBot recently announced it will further extend its 3D Ecosystem with the MakerBot Digitizer Desktop 3D Scanner.